The JPL MkIV interferometer is a high resolution Fourier Transform Infra-Red (FTIR) spectrometer, designed to remotely sense the atmospheric composition. It is the latest in a series of solar absorption FTIR spectrometers which have been developed at JPL during the past 30 years. Others include the ATMOS instrument which flew four times on the Space Shuttle (1985, 1991, 1992, 1994).

The MkIV instrument made ground-based observations from McMurdo, Antarctica, in September and October 1986 as part of the (NOZE) campaign, and flew on board the NASA DC-8 aircraft for the 1987 Antarctic polar campaign (AAOE ) and the Arctic polar campaigns of 1989 (AASE ) and 1992 (AASEII ). Additionally, it has performed 18 flights from high altitude research balloons since 1989, including winter flights from Esrange, Sweden, in 1999, 2000, 2002, and 2003.

The MkIV Interferometer operates in solar absorption mode, meaning that direct sunlight is measured and spectrally analyzed. As sunlight passes through the atmosphere, certain wavelengths are selectively absorbed by gases. Since each gas has its own unique spectral "fingerprint", which are known from laboratory measurements on pure gas samples, the abundances of over 30 different gases can be determined from each spectrum. As the sun rises/sets (or during balloon ascent/descent), spectra are measured at different heights in the Earth's atmosphere, which yields information about the vertical distribution of each gas. 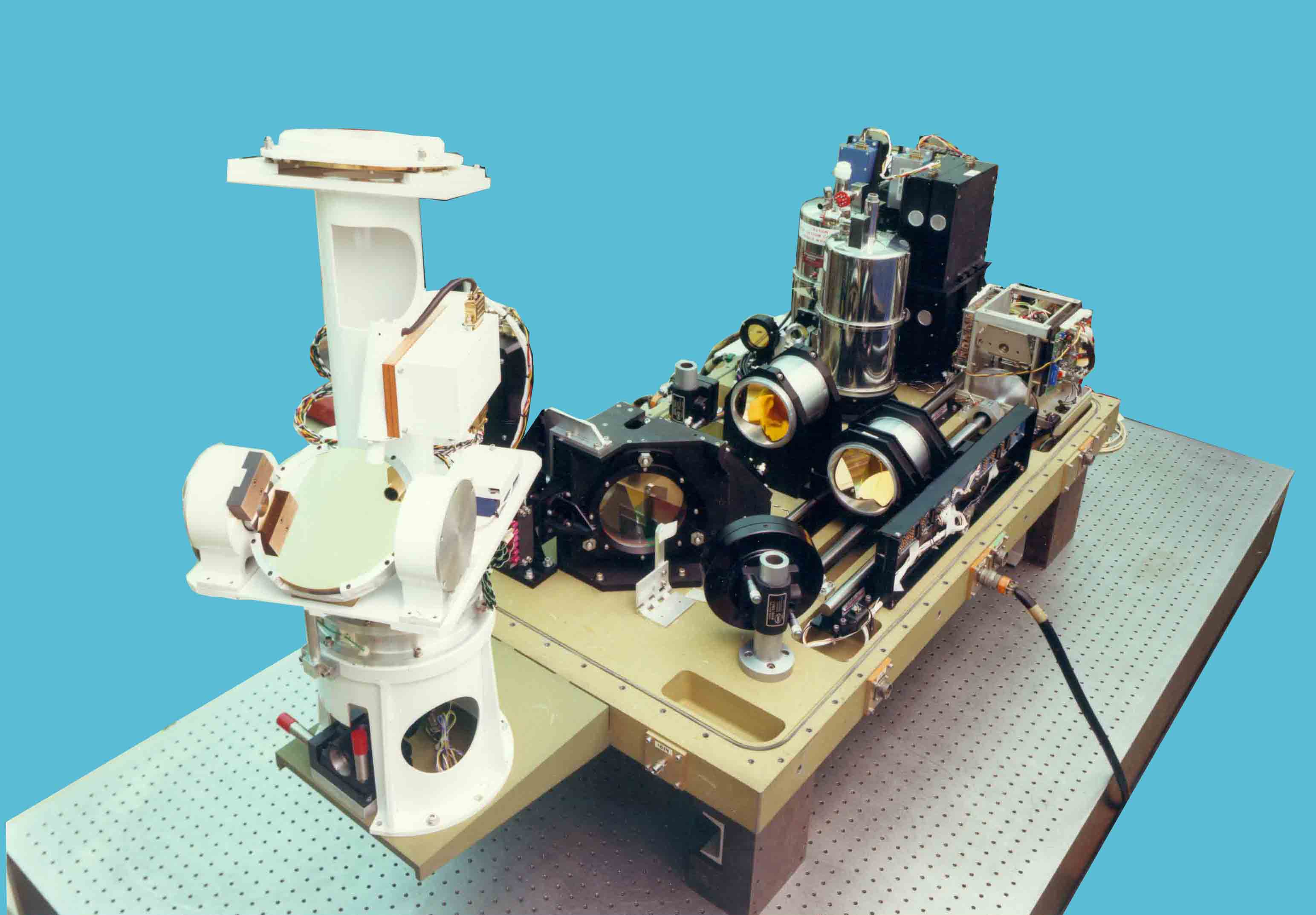 The MkIV consists of a two-axis suntracker, a double-passed Michelson interferometer, and detector optics. The first three mirrors in the optical path comprise the suntracker. Two of these mirrors are servo-controlled to guide the incoming solar radiation onto the beamsplitter, while compensating for any angular motion of the observation platform.

The beamsplitter reflects half the incident solar radiation onto a moving cube-corner retro-reflector (CCRR), while transmitting the other half through the compensator and onto the fixed CCRR. Since these beams are displaced from the vertex of each CCRR, the reflected beams miss the coated part of the beamsplitter and are reflected/transmitted onto a flat mirror adjusted to be normal to both beams. From here, the beams retrace their paths back to the coated section of the beamsplitter, where they recombine and pass through a hole in the flat mirror.

An off-axis paraboloid focusses the solar beam onto a cold field stop, located inside each LN2-cooled detector dewar, where a lens images the (uniformly illuminated) aperture onto the detector. Immediately prior to the dewars, a dichroic splits the infrared beam: the low frequencies (650-1850 cm-1) are transmitted onto a HgCdTe photoconductor, while the high frequencies (1850-5650 cm-1) are reflected onto an InSb photodiode. This arrangement prevents photon noise from the high frequencies, where the sun is brighter, from degrading the signals at the lower frequencies. Simultaneous high-resolution measurement over such a wide spectral region imposes severe constraints on the dynamic range and linearity required of the detectors, pre-amplifiers, and signal chains. In the MkIV, a large dynamic range is achieved by use of a 18-bit ADC module.

Since the interferometer is double-passed, a large optical path difference (up to 200 cm), can be achieved in a relatively small volume (0.6 x 0.7 x 1.2m). The moiving CCRR slides along steel rails, pushed by a flexible plastic integrating nut riding on a leadscrew. This configuration was developed to provide a mechanical constraint for the moving CCRR under conditions where the instrument platform may be unstable. Together with the double-passed optical configuration, this renders the MkIV instrument insenstive to the effects of mechanical distortion or shock.

The optical path difference between the two arms of the interferometer is monitored by a single frequency (633 nm) He:Ne laser, whose beam traverses the same path through the interferometer as the infrared radiation. The interference fringes of the laser beam are used to trigger the sampling of the infrared signals, This ensures that the infrared interferograms are equally spaced in optical path difference, essential for achieving high spectral resolution. The moving CCRR is translated at a velocity of 1.58 mm/s, corresponding to an optical velocity of 6.33 mm/s. Sampling the interferogram at every wavelength of the reference laser produces a 6.33/0.000633 = 10kHz sampling rate. So a 57 cm OPD interferogram (typical for ballooning) takes 90s. The digital values from the two detector signal chains are interleaved and packetized along with housekeeping information. This gives a 357 kbit/s telemetry rate, or 161 Mbytes per hour.

Atmospheric research balloons can lift a heavy payload to 40 km altitude, above 99.7% of the Earth's atmosphere. From these altitudes, we can more accurately measure the vertical profiles of many atmospheric gases. There are three advantages of balloon measurements as compared with ground-based observations: 1) Higher vertical resolution 2) Long atmospheric limb paths provide high sensitivity to trace gases. 3) Much less H2O absorption which blacks out wide regions of the IR spectrum from the ground.

For balloon flights from Sweden, the MkIV payload weight (MkIV + Az drive + batteries + 52" gondola) was 592 kg. In addition, the CNES telemetry system and crush-pads added another 41 kg, bringing the total to 633 kg. For balloon flights from Ft Sumner, New Mexico, with several experiments sharing a common 72" gondola, payload weights up to 4650 lbs (2114 kg) can be flown on 28 MCF balloons. 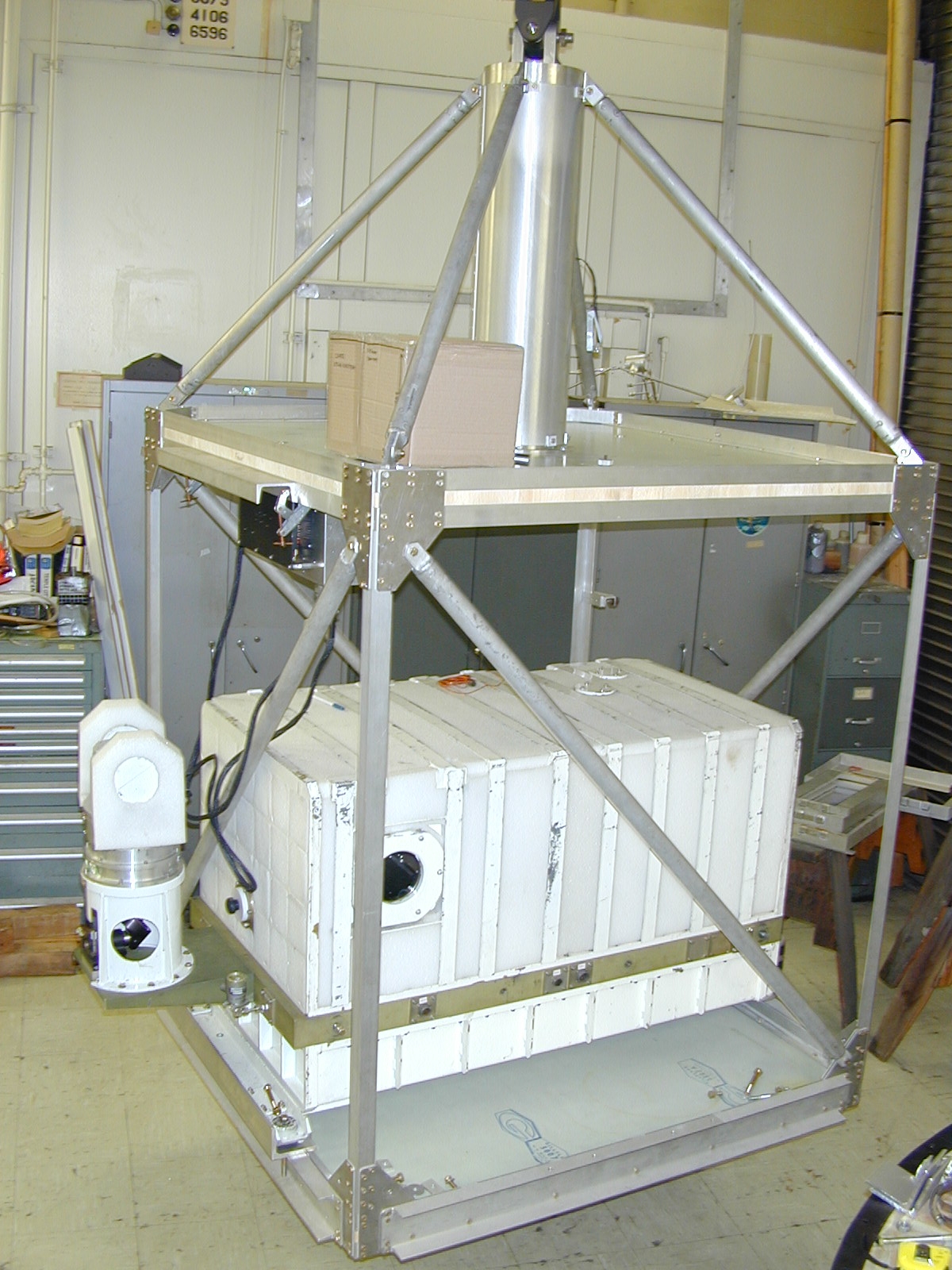 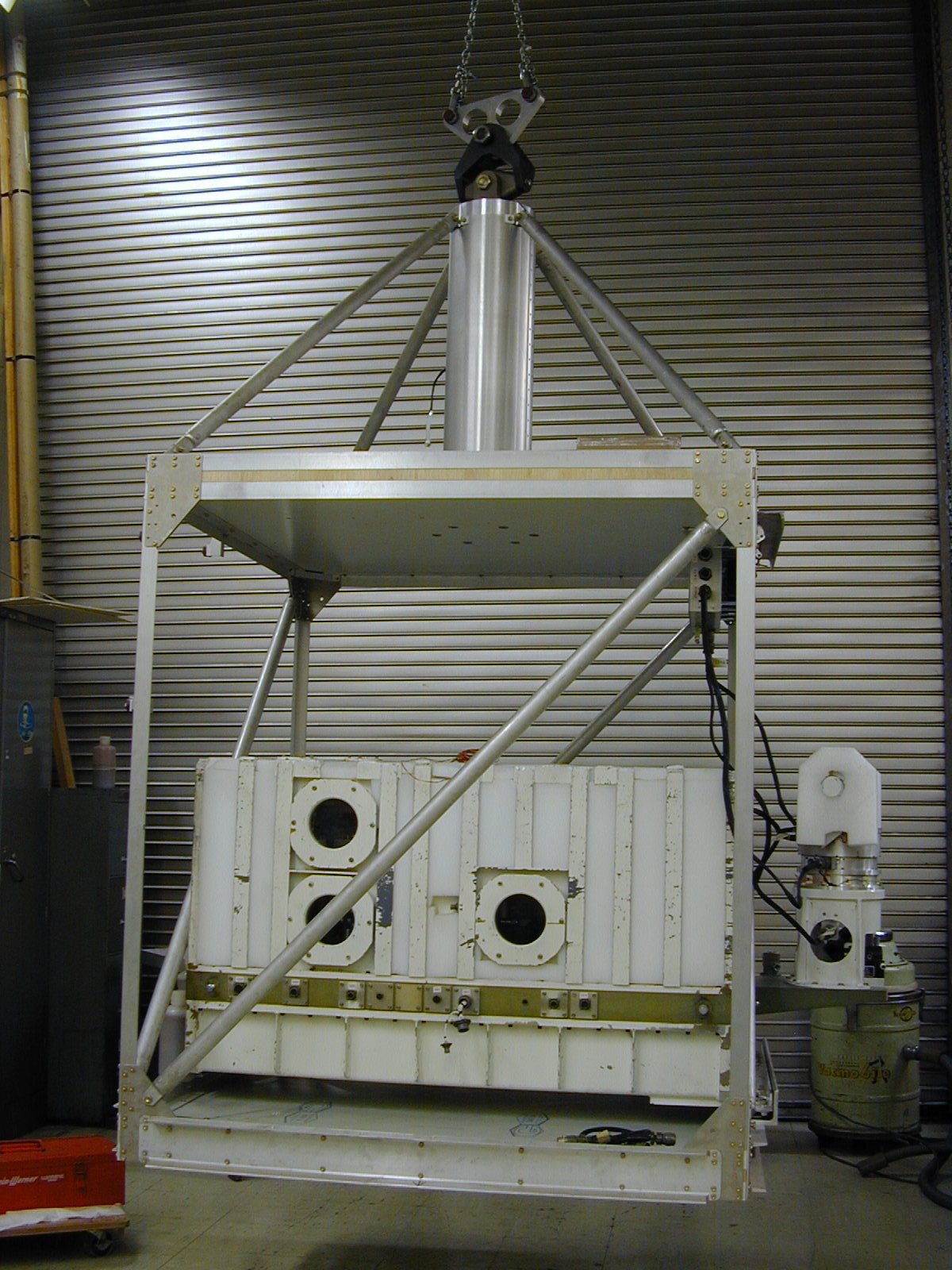 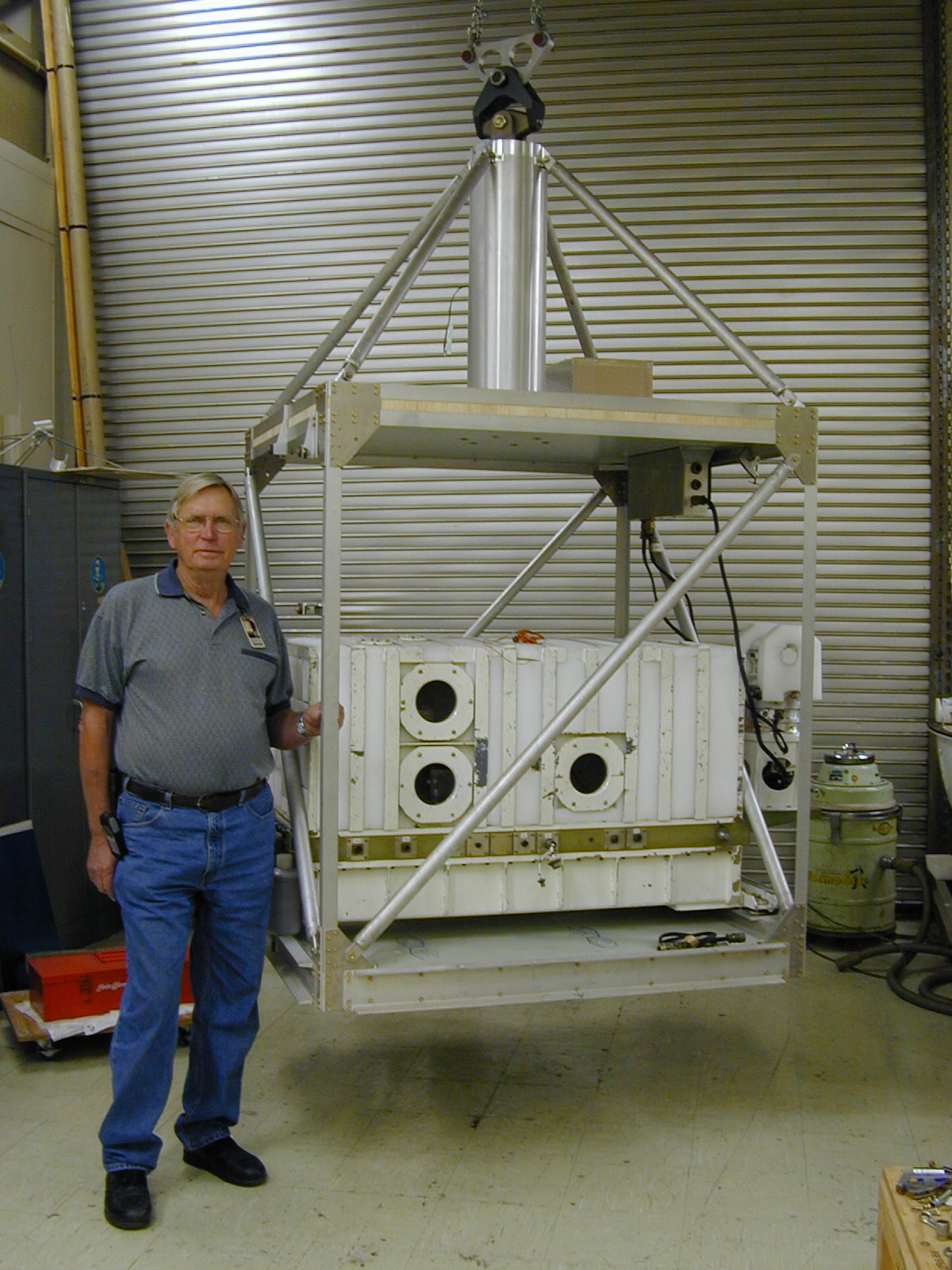